January holidays with my university’s photography society have become a bit of a tradition now, starting with Berlin in 2014, Cologne last year and then this year to Budapest. This year was to be a bit different however, rather than just attending the trip, as the Fotosoc chairperson, I was one of the people organising and responsible for the trip, it was at times stressful, but a very rewarding experience and the trip, as always, was amazing!

I woke up twice last Sunday morning, once in my bed at 3am and then once again at 33,000 feet, I was sprawled across three seats of an Aer Lingus Jet and was just about to being the descent into Budapest. As we descended preparing for landing, the layers of clouds began to disappear below us and were replaced by the glare of the bright white snow which covered the ground, we had arrived in a winter wonderland! 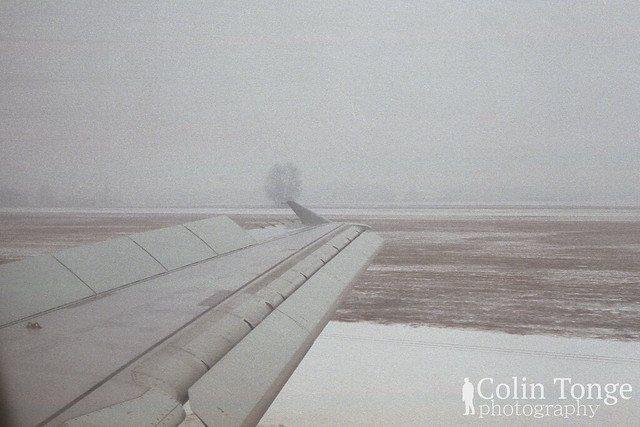 Much like the Dublin airport we had left behind, Budapest Airport’s Terminal 2B was quite far from the city centre and so we travelled the full length of a bus route to get to the terminus of the metro which then slowly trundled us into the city which we were there to visit. Personally, I find public transport in other countries fascinating and travelling on a ‘bendy-bus’ through the Hungarian countryside was like a throwback to early 2000s Dublin! The rusty metro train was a more nerve-wracking however, travelling at speed in a train whose walls you could see through at points, is not my preferred method of transport!

Once arriving, we checked into our hostel and got some lunch before wandering the streets to see what we could find. Budapest, like many Eastern European cities closes on Sundays, so most of the shops and even the shopping centre was closed. We spent our afternoon walking around, looking at the architecture and having fun in the snow, slowly working our way towards Margaret Island. Located in the middle of the Danube, the island is surrounded by a running track and my friends and I quickly explored it, we climbed down under the bridge we’d used to get onto the island too and the symmetry looking up made for the perfect instagram!

That evening we took part in team building activities in groups organised by a company called ‘Trap.’ My group were locked in a basement and had an hour to find clues to find our way out before a murder would show up. We escaped with 5 minutes to spare and I have to say, it was so much fun. It was something very different for a holiday but an amazing way to get to know the people in your group, I really feel starting this way is why we became such a close group over the holiday.

Monday morning bright and early we headed to The Great Market Hall. The buzz here was amazing, locals busy doing their shopping and tourists looking for some gifts to bring home. The ground floor was all fruit and veg while the upper floor was crafts, lace and leather stretching out in all directions. One pro-tip I noticed as I rambled through the stalls is that the further you get from the entrances the cheaper things get, so be sure to shop around before you buy. There was also a sign pointing downstairs to an Aldi which I of course had to check out, while down there however I discovered it’s also the location of the fish and meat part of the market. While I am a fan of fish, the pungent smell and sight of hundreds of fish in tiny tanks (many dead and floating on the top) was quite off putting, the upstairs with the bright colourful fruits makes for a much better visit. 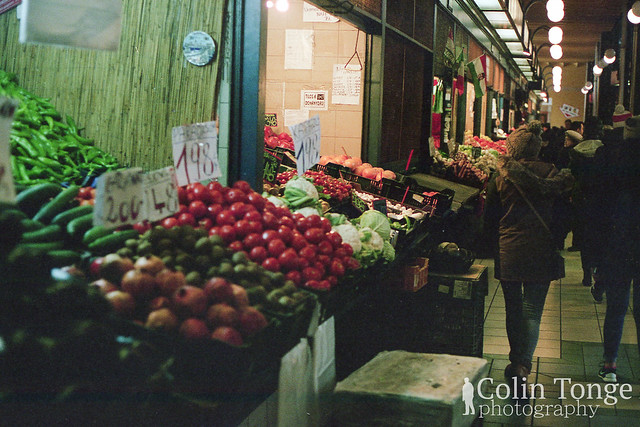 That afternoon we availed of a free walking tour of Buda, the older part of the city to the West of the Danube. This district was lovely to stroll through and with a blanket of snow on top of the monuments, it made them even more picturesque.  The highlight for me had to be getting a warm ‘chimney cake’ halfway through the tour, the Eastern European delicacy that is a mountain of cinnamon and sugar provided the necessary fuel to get me through the rest of the tour in the freezing cold! While on the walking tour we also witnessed the changing of the guard, having seen the London one many a time this seemed very like a budget version, although we did have the sound of an army drummer filling the air. It also took place at three minutes to the hour, clearly a very precise military exercise! 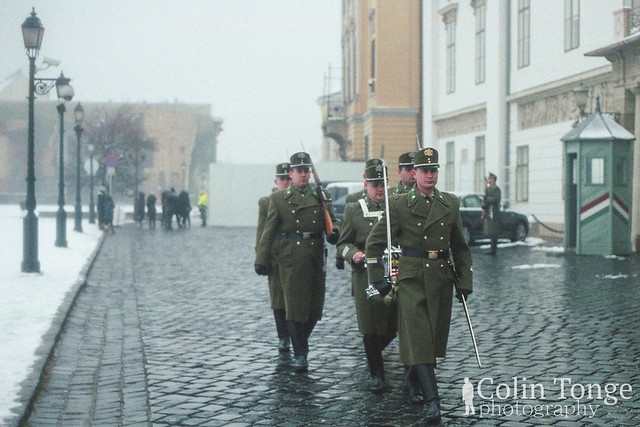 Tuesday was our last full day and we started our morning by walking around the Parliament buildings. Huge and imposing, they were built to impress. Snow which had fallen here was promptly removed and piled up by the river, it gives a weird feeling to this area, it’s almost like winter had avoided this small pocket of the city. Following a saunter and a few snaps we began to walk along the river back towards the hostel. 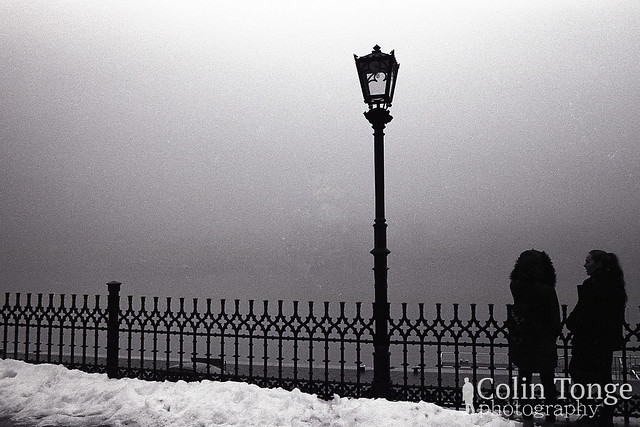 That afternoon we went to the holy grail of tourism in Budapest, the Széchenyi Thermal Baths. I was skeptical at first, outdoor pools of naturally heated water when it’s 0 degrees out, it just sounds like a way to punk tourists! However, once I ran from the changing rooms to the first pool I immediately changed my mind. We watched the light fade with the steam rising around us and then retreated to the sauna and sulphur pools for a bit. With warm relaxing waters and good chats with my friends, it meant that after almost three hours in the baths I was the most relaxed I’ve ever been.

We started the final morning by  taking the Budapest Castle Hill Funicular vertical cable car back up to the palace. From the top of the hill I looked down on the city, or tried to anyways, fog had plagued the entire visit and our final morning was to be no different. 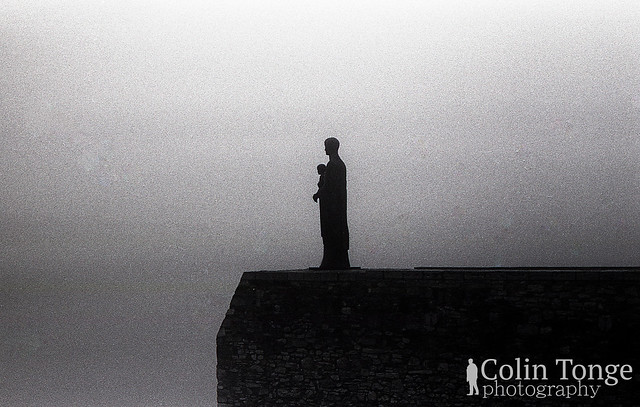 For the remainder of the day we wandered around the city centre and spent our left over Forint, I of course spent lots of mine on cheap film to replace some of what I’d used on the holiday.  A highlight of our afternoon had to be when we came across a busker playing Brahms Hungarian Dance No. 5 on the violin, it was the perfect way to end our trip and shortly after that we found ourselves on the tram/metro/bus/plane journey home again, the Brahms still playing in my head. 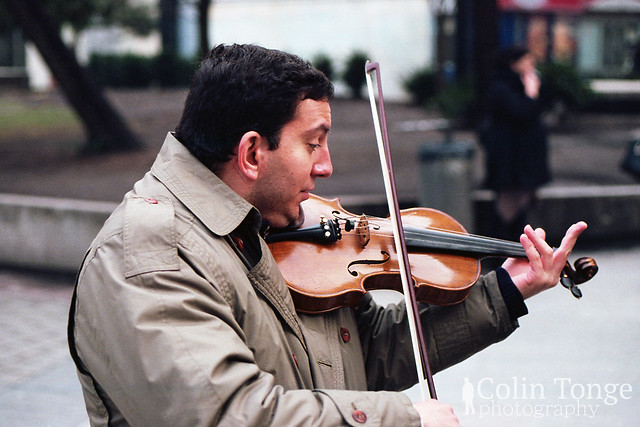