Last week I went on the most interesting holiday I’ve ever been on, my family and I visited all three of the Aran Islands. The Aran Islands are a series of three islands off the Galway coast on the West of Ireland, they’re home to tight knit Irish speaking communities, ancient monuments and amazing scenery. We started our trip by flying to the largest of the Islands, Inis Mór and worked our way down through them by boat before flying home. For this weeks blog I’ll be writing about some of my highlights from Inis Mór, starting with the trip over.

We flew to Inis Mór from Connemara airport and the experience of getting from there to the island is the most bizarre and most fun flying experience that I’ve ever had. The flight booking experience was a breeze and no passports nor security checks were needed to get on, although they do weigh all the passengers to balance out the plane… Once seated in one of their ten seat planes, you are deafened by engine noise as the propellors whir you on the world’s fourth shortest commercial flight for a total of six minutes. As soon as you take off you are greeted with amazing views over the three islands.

The flights aren’t cheap at nearly €50 return and so are rarely used by tourists, instead it’s filled with islanders who get the flight at a subsidised rate, but for experience alone I can’t recommend flying to the islands enough if you get a chance. It’s also ideal if you’re not great on boats as it’s over an hour to the islands by ferry. 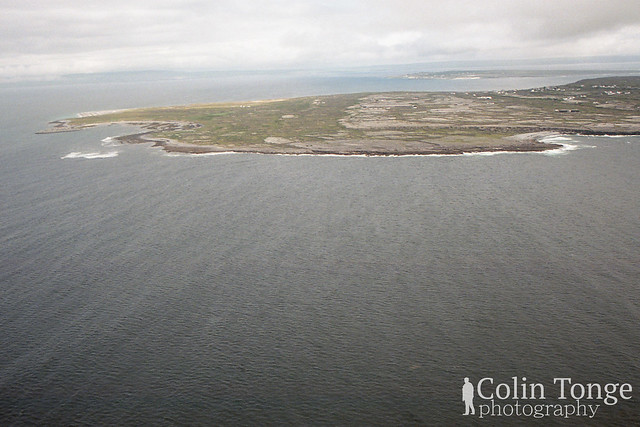 Kilronan is Inis Mór’s main village and was our base during our time there. It’s a strange town which is packed beyond bursting every day but empties out in the evening when the ‘day trippers’ get the last boat back to the mainland. It has one shop, a few pubs/restaurants and a supermacs, so basically everything you need for a your stay! There’s also a lovely beach you can walk to towards the South of the main village. 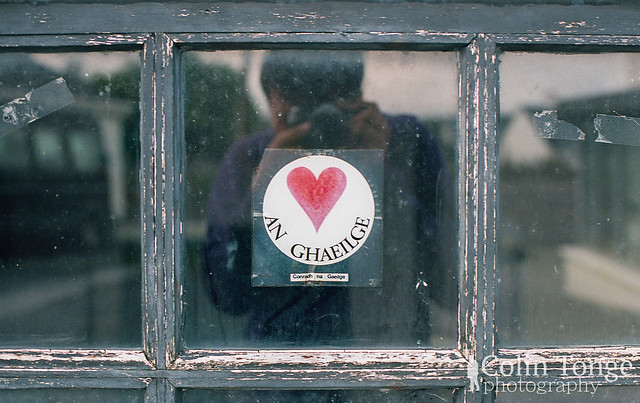 Hidden down a lane between Kilmurvey Beach and the Seven Churches is ‘Clochán na Carraige,’ an ancient beehive hut. Much like everything on the Aran Islands you can go right up to and even inside it, it’s amazing seeing how such a hut was built. Being down a lane and then a walk through a few fields ,it’s not touristy at all and so it’s the perfect spot to go for some peace and quiet during the middle of the day when the island is full of hundreds of ‘day trippers!’ 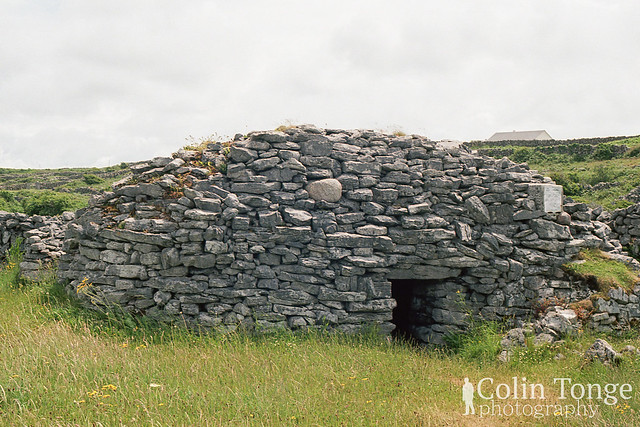 One thing you should expect on a visit to the Aran Islands is loads of walking, public transport is non existent and unless you want to get a taxi everywhere you’re going to have to walk (or cycle) the island paths. According to the health app on my phone I walked just over 61km on my three days on Inis Mór with half of that being in one day alone. I also climbed the equivalent of 156 flights of stairs so Inis Mór really isn’t for someone who struggles with loads of walking, if you’re able though it’s nice and relaxing and the sights around every corner are worth the incline. 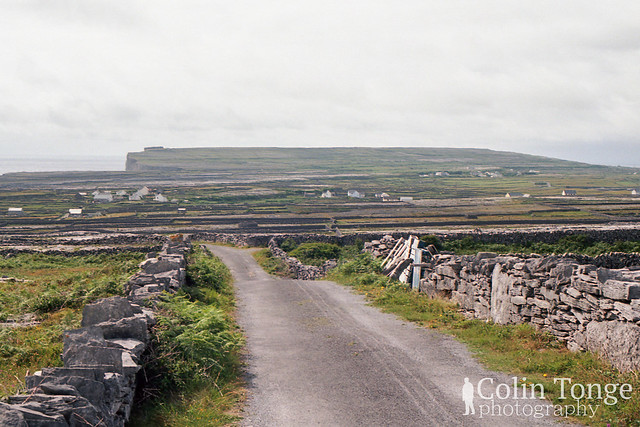 One of the most visited parts on Inis Mór is Dún Aonghasa, a fort on top of the cliffs on the West of the Island. It was one of the busiest spots we visited and also the only place we had to pay into on our entire holiday. The fort itself wasn’t that impressive to me, I think I’d become desensitised to stone buildings by this point on my trip! The views down the cliffs however were spectacular and it was the perfect spot to sit and eat a picnic lunch with the sound of the distant waves crashing off the rocks beneath us. 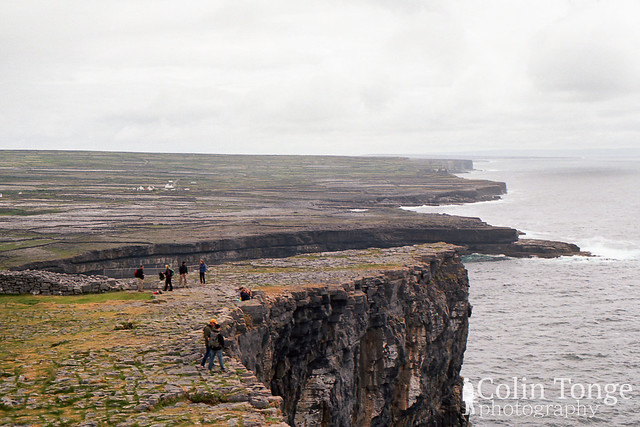 At the West of the island is the site of The Seven Churches. It’s a small area and when we arrived it was flooded with tourists. It was a great place to explore and see the various types of architecture from throughout the years, but don’t expect the peace and tranquility you’ll find elsewhere on the island. 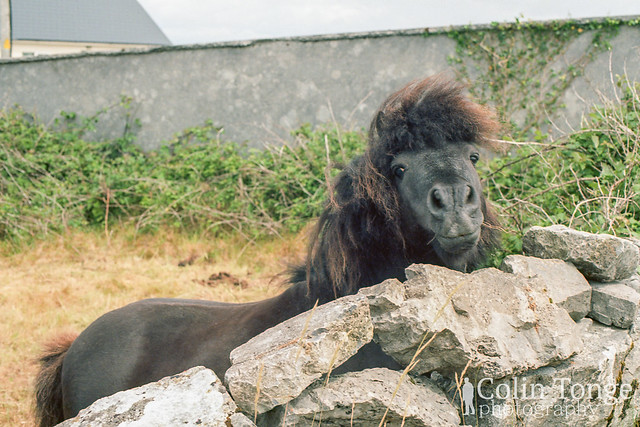 At the highest point on the island is Dún Eochla, a ring fort with panoramic views over the island. We visited this spot early in the morning and it was completely empty but I think it’s off the beaten track enough to be quiet all day. It’s a much easier climb then any of the other forts despite being on the highest point, having most of the ascent on a paved road really helps take the strain off! 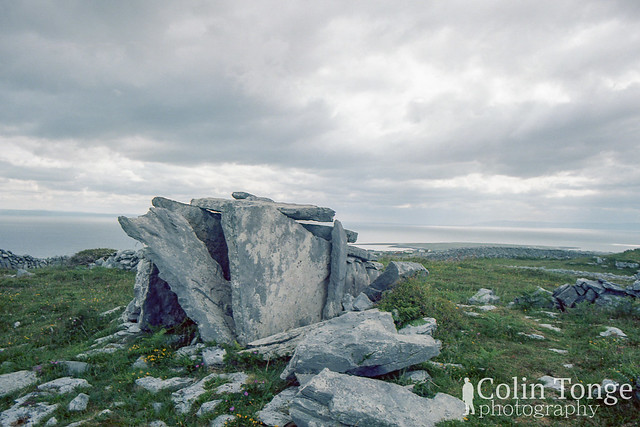 Dún Duchathair is in many ways exactly like Dún Aonghasa, but in my opinion, so much better. Like Dún Aonghasa it’s a semi circular ring fort over the cliffs but the black cliffs below this make it much more spectacular I think. The walk is easier (although it crosses through many fields with no signposts) and it’s much closer to Kilronan yet despite all this it’s so much quieter. The visit here was one of the highlights of my time in Inis Mór. 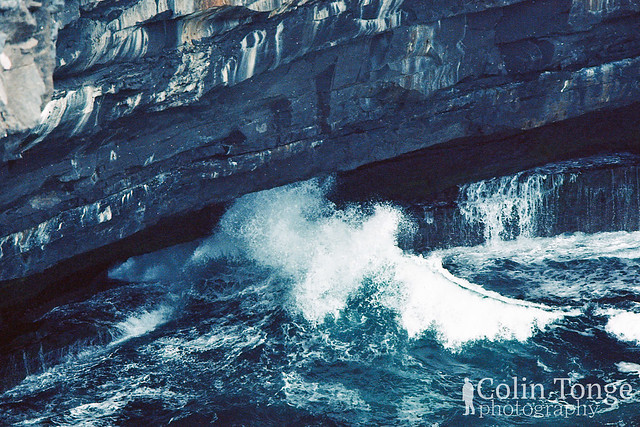 At the recommendation of a friend of mine who’s from the Island, we visited Teampall Brennáin, it was the final place we visited and was an easy climb to another quiet spot. We sat at the side for ages using the building to shelter the breeze as we watched the boats come in and the planes land. It was the perfect place to end our time on Inis Mór, looking back over the island we’d explored over the previous three days. 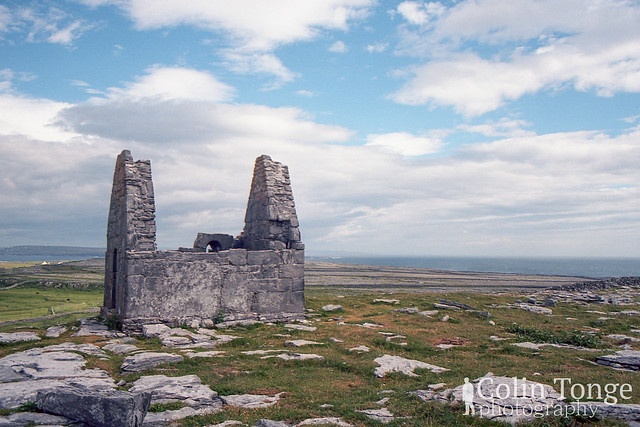 We spent a total of three days on Inis Mór and I feel like it was the perfect amount of time to explore the island, we didn’t feel rushed and we didn’t feel like we’d ran out of things to do. I really liked my time there, there was a good selection of shops, pubs and restaurants in Kilronan and then plenty of amazing sights to walk around when we left the town. The next stop on my Aran Islands adventure was the middle island, Inis Meain, and I’ll have a post on that next Sunday.

The full album of my photos from Inis Mór are on my flickr.

One thought on “Inis Mór”